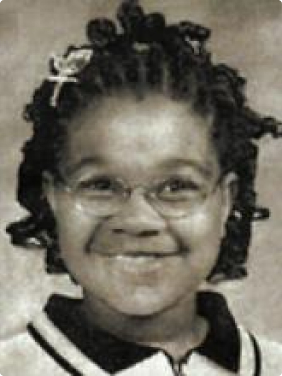 ‘Mrs. Jones, my baby got her wings today.’ And I told her, ‘We have to live right so we can get our wings when it is our time.’

Asia Cottom, 11, had just started sixth grade at a new school, eager to learn and pleased to be at the campus where her father worked. The North Michigan Park girl was selected to take a trip to California with a teacher to participate in a National Geographic Society ecology conference. Asia and her teacher, Sara Clark, were on American Airlines Flight 77 at the start of their four-day trip.

Though Asia was new to Bertie Backus Middle School in Northeast Washington, some staff members said they knew her because her father works there as an aide, helping to coach basketball, patrolling the halls, and serving as a book clerk.

Her father is popular with students, Backus employees said, because he is patient and walks around with a big smile – the same way his daughter was described by several people.

They said Asia was a kindhearted girl who helped other students with learning difficulties; she was persistent herself, continually trying until she grasped a lesson.

Neighbors said they saw her and her younger brother playing outside and walking to a bus stop to go to school; they recalled that she would greet them with a smile and a hello. She also watched over a young cousin, reminding him to not eat too much popcorn.

On Wednesday, the day after the hijacking, one of her teachers, Lizzie Jones, addressed the sixth-grade language arts class.

“We are missing someone today. Do you know who that is?” she asked. “Yes,” some of the children said, “Asia.”

The students talked about how much they would miss her.

Quick Fact The Asia SiVon Cottom Memorial Scholarship Fund (ASC), a charitable non-profit 501(c)(3), was founded in 2002 to honor the life of Asia SiVon Cottom and establish a scholarship for our future leaders and innovators. Learn more
Share Asia's Story
Find Asia in the Memorial
Find Asia’s bench in the 9/11 Pentagon Memorial.
Interactive Map
Share your Story
Do you have a 9/11 story to share? Share your story with us.
Submit Your Story
9/11 Pentagon Memorial Heroes