Questions about the Events of September 11, 2001 at the Pentagon

What was the time of the September 11 attack?

How many people were on American Airlines Flight 77?

When the plane lifted off at 8:20 am, it had 64 people on board:  a crew of six plus 58 passengers, including the five hijackers.

What is the number of victims who died at the Pentagon on September 11?

There were 184 victims total (125 in the Pentagon and 59 on American Airlines Flight 77). This number does not include the hijackers on the plane.

What was the number of hijackers aboard the plane?

What was the flight number?

Yes. After the September 11, 2001 attacks, the flight numbers of the jetliners that crashed in New York, Washington, D.C. and rural Pennsylvania were retired.

What was the American Airlines Flight 77 departure and destination?

What was the direction of the plane’s approach?

American Airlines Flight 77 approached from the west and at a ~42 degree angle to the western face of the Pentagon.  (The buildings on the hill are called the Navy Annex and the three spires are part of the new Air Force Memorial. Note: The Air Force Memorial was not built until after 2001.)

Where did the hijacked plane impact the Pentagon?

American Airlines Flight 77 struck the western façade of the Pentagon at the 1st Floor level just inside Wedge 1 near Corridor 4, and proceeded diagonally at an approximate 42-degree angle towards Corridor 5 in the mostly vacant and unrenovated Wedge 2.

Why was the impact of the Pentagon so devastating?

Flight 77 had taken off with a total weight of over 90 tons, roughly 25 percent of it in fuel. Allowing for the hour-and-a-quarter flight from Dulles Airport to Kentucky and back, Flight 77 still had most of its original 7,256 gallons of fuel on board, the greater part of it in the wings, when it hit the Pentagon. Traveling at 530 miles per hour, the aircraft, and the subsequent fuel explosion, delivered enormous destructive power. The destruction and, more importantly, the loss of life, would have been worse without the reinforcement of the exterior wall of Wedge 1 and installation of the blast-resistant windows and fire suppression systems made during the recent renovations.

How long did it take before the building collapsed?

Approximately 30 minutes. The report of the American Society of Civil Engineers concluded that “the direct impact of the aircraft destroyed the load capacity of about 30 first-floor columns and significantly impaired that of 20 others.” Moreover, “this impact may have also destroyed the load capacity of about six second-floor columns adjacent to the exterior wall.” Shattering the many columns essentially doubled the span between columns, thereby imposing severe stress on the stability on the affected building section and causing the collapse of the four floors in the E Ring above the impact point at 10:15 am.

Questions about the Pentagon Memorial

Who designed the Pentagon Memorial?

How was the final design selected?

A worldwide competition. There was a jury made up of highly respected design professionals, family members, and Washington dignitaries, including two former Secretaries of Defense. The winners were announced March 3, 2003.

When was the ground breaking?

When was the Memorial dedicated?

What is the cost of the Memorial?

The Memorial cost $22 million to construct. The Pentagon Memorial Fund is continuing to raise money for a preservation endowment and educational outreach opportunities.

What is the size of the Pentagon Memorial?

Is there handicapped parking? Where?

There are five parking spaces for automobiles for people with disabilities available in Lane 1 of the Pentagon South Parking lot, adjacent to the Memorial Park. This parking is available 24 hours a day, seven days a week. All vehicles utilizing this parking shall display a valid disabled parking permit issued by the state in which the vehicle is registered.

Where can visitors park?

Private Vehicle: Parking on the Pentagon Reservation is for AUTHORIZED PERSONNEL ONLY. Private vehicles may off load and pick up passengers at the North Rotary Road Kiss and Drop points, but they must move on and cannot park or stand at these locations. Parking regulations are strictly enforced at the Pentagon.

Evenings, Saturday, Sunday & Holidays: The Hayes Street Parking lot is available on weekdays from 5:00 pm – 7:00 am, and all day on Saturday, Sunday and holidays (NOTE: OVERNIGHT PARKING IS PROHIBITED).

How do I get to the Memorial?

The Memorial is accessible to the general public by Metro, private vehicle, and bus. However, due to parking constraints, the public is urged to use Metro as the primary means to come to the Pentagon and the Pentagon Memorial.

When is the Memorial open?

Are there restrooms available for visitors?

Can I leave a memento at the Memorial?

Can I eat or drink in the Pentagon Memorial?

Due to sanitation concerns and vermin control, eating and drinking (except for water) in the Pentagon Memorial is not allowed.

Pets and other animals are not authorized on the Pentagon Reservation or inside the Memorial. Seeing-eye dogs, guide dogs, police working dogs, etc. are authorized entry while performing their intended service. Owners and handlers are asked to pick up after their animals.

Can I take pictures at the Memorial?

Photography is permitted within the Pentagon Memorial. However, consistent with current policy (32 CFR 234), photography is restricted at all other locations on the Reservation (i.e. pedestrian and vehicular pathways; drop-off areas).

Can I smoke inside the Memorial?

In order to minimize debris that may interfere with proper operation of the Memorial, we ask that visitors not smoke in the Memorial or the Gateway.

Can tour groups go to the Pentagon Memorial?

Who is responsible for maintaining (picking up trash, cleaning the benches, etc.) the Memorial?

Questions about the Pentagon Building

When was the Pentagon constructed? How long did it take to build?

Construction began on September 11, 1941 and was completed in the remarkably short time of sixteen months on January 15, 1943. The building rests on 41,492 concrete columns. The shortages of materials required for war production raised many design and construction problems. The use of reinforced concrete in lieu of formed steel for the building made possible a saving of 43,000 tons of steel, more than enough to build a battleship. The use of concrete ramps rather than elevators further reduced steel requirements. Drainage pipes were concrete, ducts were fiber, and interior doors were wood.

How much did it cost to build the Pentagon?

What is the Pentagon?

Headquarters of the Department of Defense, the Pentagon is the world’s largest low-rise office building.

Why was the Pentagon a terrorist target?

Since World War II, the Pentagon has stood as a symbol of American power and influence to the nation and the world. By September 11, 2001, it had been the command center of the nation’s military establishment for more than half a century. In some regions of the world, particularly in the Middle East, a U.S. military presence and perceived power would have made the Pentagon an object of fear and hatred, and a likely target of attack by terrorist enemies.

What was the significance of the Pentagon’s renovation project on the area that the plane hit?

In 1990, Congress authorized a complete overhaul of the Pentagon. Upgrading security stood high on the list for the reconstruction and renovation of the building, which began in 1998 with Wedge 1. By September 2001, Wedge 1 had been largely reoccupied and work was under way on adjacent Wedge 2, which had been cleared of all but about 700 occupants. On September 11, the offices in or near the impact point were not completely occupied, either awaiting new tenants in Wedge 1 or mostly vacated in preparation for renovation in Wedge 2. Had the aircraft hit fully-occupied unrenovated Wedge 5, several hundred yards to the right, the toll of dead and injured, as well as structural damage, would have been much greater.

How did the structure of the Pentagon play a role on September 11?

Although never designed to offer the protection of a bunker, the building’s steel-reinforced concrete and brick construction protected most employees in Wedges 1 and 2 from fires and explosions, which saved their lives. Moreover, the rigidity of the Pentagon’s façade caused some of the fuel in the wings to detonate on impact, diminishing the inside destruction. The lighter structure and largely glass facade of the World Trade Center buildings presented much less impact resistance.

Where is the Pentagon Memorial located?

The Pentagon Memorial is located at 1 Rotary Road on the Pentagon Reservation in Arlington, Virginia. The mailing address is:

How big is the Pentagon?

The Pentagon is a five-sided, five-story (plus two basements) building containing a large central courtyard and five concentric rings of offices. It is twice the size of the Merchandise Mart in Chicago, and has three times the floor space of the Empire State Building in New York. The U.S. Capitol building could fit into any one of the five wedge-shaped sections. Despite 17 1/2 miles of corridors, it takes only seven minutes to walk between any two points in the building.

How many people work at the Pentagon?

There are approximately 24,000 employees, both military and civilian.

Where are the interior memorial and chapel located?

They are located at the end of Corridor 4 on the first floor, across from the Pentagon Memorial.

How can I arrange a tour of the Pentagon or visit the interior memorial and chapel?

All guided tours of the Pentagon are free and are available to schools, educational organizations and other select groups by reservation only. Tours are conducted Monday through Friday during normal working hours. Tours are not conducted on weekends or federal holidays. Groups interested in touring the Pentagon should contact the Pentagon Tour Office at 703-697-1776. Additional information can be found on the Internet at http://pentagon.afis.osd.mil/

How long did it take to rebuild the damaged area?

The Pentagon Renovation and Construction Program Office (PENREN) began the Phoenix Project on October 18, 2001, so named because of its representation of the mythical bird rising from the ashes. Reducing the schedule of the original Wedge 1 renovation, the impacted portions of the Pentagon were demolished, rebuilt, and occupied in less than one year. The offices directly above the point of impact were occupied on August 15, 2002, 28 days ahead of schedule.

Questions about the General Area

Where is the Pentagon victim’s marker in Arlington Cemetery?

It is located in Section 64, near the Arlington Cemetery Columbarium.

How do I get to Arlington National Cemetery?

Take the exist toward Washington

How do I get to the Air Force Memorial?

Destination will be on the right

How do I get to Pentagon City Mall / Crystal City?

From Washington, D.C., take the Blue line toward Franconia-Springfield OR the Yellow line toward Huntington

Where is the Arlington County bike path?

Next to the Pentagon Memorial Gateway 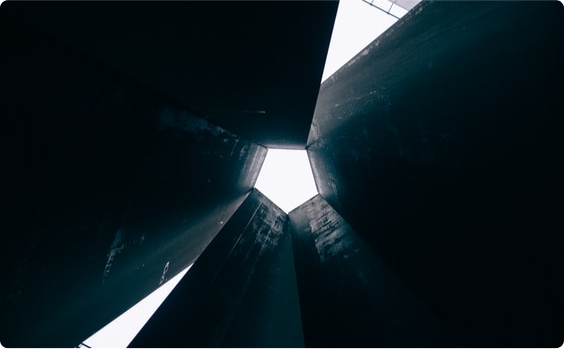 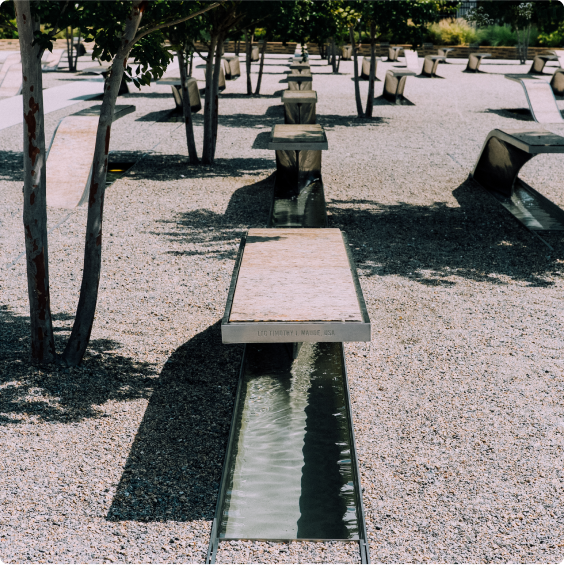 The interactive timeline contains information about the events of September 11, 2001 at the World Trade Center in New York City, in a grassy field in Shanksville, Pennsylvania, and at the Pentagon. 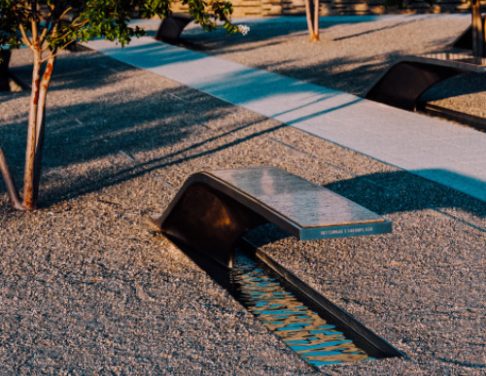 Link Headline Title Lorem Ipsum. This one is a little bit longer.